Once again, it feels good to return to my blog. If only life weren't so crazy lately...

This past week I found myself considering the curious impact my husband's authority has upon me. Always the impact is positive, but oftentimes this is in spite of my strongest efforts to fight it. I've become really familiar with a feeling that I can only describe as feeling emotionally weak; he makes a decision, I disagree with it, he doesn't care, and then the feeling of weakness sets in. I know that he is trying to be fair, I know that no matter how valid my points are my disagreement isn't significant enough to push the issue, and I know that doing so either already has or will result in a sore backside.

Of course, I have a great example. I called on my way home from work to make sure that Bruce had remembered to pick up three items I had forgotten at the grocery store. Without apology he informed me that he had only remembered two of the three items, and I calmly expressed my frustration at his unwillingness to make lists despite his consistent failure to pick up all he intends to pick up. He said it was not that big of a deal, and I strongly disagreed. After all, I was the one who took care of the majority of the groceries, I am the one making dinner every night, and I was the one working extra hours that week. I didn't get out of control, but I definitely raised my voice. He raised his voice in response, and I escalated even further. He finally said "We're done talking about this, and know that when you get home you are really going to get it." Oh I was so mad! He absolutely was being unfair! I had asked him to do one small thing and not only did he not do it, but he was angry that this bothered me. I took the rest of the ride to try to calm down. When I got home he was in the middle of an online assignment, but stopped long enough to come over and tell me that I didn't need to yell to get my way, and that I knew better than to use that kind of tone. He did apologize at that point (and had even righted the original wrong), and I fully calmed down and let it go. And thankfully he saw that I didn't deserve to be punished over something that was his fault in the first place!

Apparently I was wrong in that assumption. When he finished his assignment he stood up and said "Go ahead and get in the bedroom. Undress and bend over the bed." What?? Why?? I've asked this aloud enough times to know that it is definitely definitely in my best interest to articulate any confusion I may have at a later time. I grudgingly did as I was told, all the while firmly feeling that I had not been in the wrong. He came in and laid into me without hesitation. After several strikes he began lecturing, punctuating each statement with several strikes... It was not appropriate for me to raise my voice in the first place... I could have been more respectful in stating my concern... I didn't need to swear... I shouldn't have been using the phone without wearing my headset while driving anyway... by now I was extremely sore and crying out with every strike, but when it occurred to me that all of these points were actually valid, I began crying real tears. I wasn't being punished over the original issue at all, but rather how I had handled my frustration in response to it. I begged for mercy, and was denied. After several more breathtaking strikes, it finally stopped. As I caught my breath and tried to collect myself I was surprised to find that I didn't really care who was at fault for what. The bottom line was this: I had been disrespectful to him, and not only did he love me enough to own up to and correct the original issue, but he didn't roll his eyes, hold a grudge, become bitter, or decide that I wasn't worth the effort of addressing the issue. He took the time to share his concerns. He loved me enough to come towards me, even in the face of my disrespect. All thoughts of how harshly I should have been punished, who started it, and who was most to blame simply faded in light of this fact. We hugged, and as usual we were both calm and ready for a fresh start. I felt loved and cherished, and I appreciated the feeling so much that I desired to respond with a stronger expression of respect. Love and respect... his expression of love made me want to respond with an expression of respect, which makes him want to respond with an expression of love... Round and round we go... I may not always understand the ride, but I know that I never want to get off :) 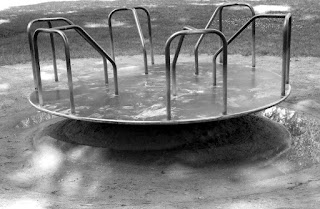